Our Halloween started off a little rocky…
After Tyler woke up in a fabulous mood, I tried to put on his costume
and that basically started a war.
Yes, war with a two year old…. You know how that goes, right?
So I left out the costume in hopes if Tyler trying it out himself.
Needless to say, he didn’t touch it all day.
And he was crabby all day!
I talked up trick or treating and Tyler really could have cared less.
I figured we were in for a short session of trick or treating.
My SIL came over with her son William, who is just 8 months older than Tyler,
and we enjoyed some quick bites of pizza and started to get ready.
As Taryn got William ready in his little costume, I was dreading getting Tyler ready.
But once again, he surprised me.
We put it right on with no struggle or whining!
I think after he saw his cousin, and the kids at the door, he had relaxed a little.
We loaded up the boys in our double stroller,
and Summer into the front pack and we headed out.
The first few houses George was a little Curious, and had no problem walking with Daddy and
cousin William up to the houses. He wouldn’t say Trick or Treat, but he would say Thank you.
And he also had no problem sticking his hand in peoples buckets to take his own candy!
(Yep, he’s my kids all right!) 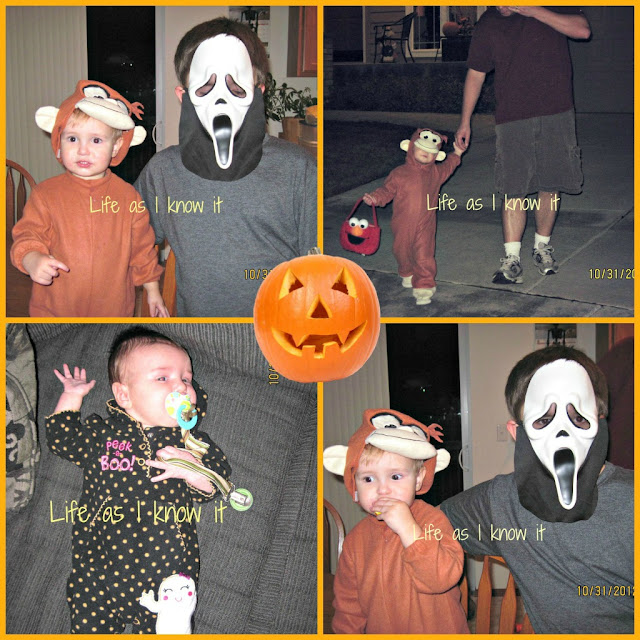 After hitting quite a few houses we ran into Zachary and his friend William, who had been out
doing their own Trick or treating… Can I just say, those boys scored big time! It was by far the most
candy Zachary has ever gotten. And also… it was his first time going with a friend and he had a lot of fun!
It is so funny to see Zachary wearing his “Scream” outfit- which he was too hot and ended
up taking off everything but the mask.
I remember when I was a teenager and Scream came out, that mask was so popular, and here we
are years later, and my kid is now wearing that. Guess it will never go out of style!
My little Summer girl gave a fuss a few times, but mainly just cuddled against me and slept.
And Tyler, well, he loved Trick or treating so much that he didn’t want to come home.
He loved carrying around his bucket and would tell me, “heavy”.
Even though the middle of our day was full of crabbyness,
I am glad it started and ended with a happy happy boy!

Yesterday the kids worked hard on their diving ski

Day 1 of soccer camp thanks to @challengercamps

I sure love my people ♥️ Thankful for family a

So much fun with tie dye last weekend!