I should just start every post with this sentence: I originally found this on Pinterest.
Does anyone else feel that way? I sometimes wonder what I would do without Pinterest. Mainly because I have found sooo many cool things on there that I’ve already made, or want to make.

So, I found these blocks on Pinterest. I won’t lie. I’m one of those people that when I see something in the store, or Pinterest, I think, “I don’t need to spend money on that, I can make it myself.”
Anyone with me on that?

But the problem is that half the time I never make it. I forget about it, or don’t remember how it looked once I’m home, etc. Thanks to Pinterest, I can now just pop it in a folder.

I thought these were super cute. And I decided to make them as part of my 6 items to make for my Resolutions in Motion. 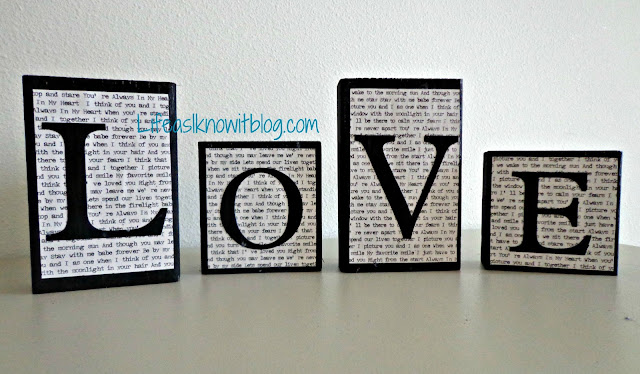 Here is what I used to make these cute blocks:

4 blocks. (2×4 pieces that were just laying around after we finished part of our basement last summer)
black paint (those little tubes from the craft store)
1 piece of deco scrapbook paper. Luckily I have lots of this laying around
1 piece of black card stock. Again, laying around.
and some mod podge.