Today Ann is sharing a really yummy treat that even kids can help with!
————————————————————————–
So excited to be guest posting for Kate here at Life as I know it.  I am Ann all the way over from Such a Mama!  Typically, I blog about my two adorable rugrats Connor, 4 and Amelia, 1, our life, parenting, fun, and an occasional recipe or craft.
One of the most challenging parenting issues we have run into is picky eating. Not just run of the mill picking eating, but trips to the doctor and dietician picky eating.  I am constantly trying new things, new foods, and new techniques for maximizing good food in whatever he is willing to eat at that moment.  Sometimes I can sneak some pureed veggies into mac and cheese, until he refuses to eat even mac and cheese.  One thing that he has almost consistently enjoyed is homemade popsicles – or “mopsicles” as he calls them! No idea why he calls them that… Something to do with Max and Ruby maybe?
My basic recipe is this – one part milk based product (like yogurt, pudding or even egg nog) and one part fruit.  I have a whole board of popsicles pinned on Pinterestbut I inevitably I just throw in whatever we have at hand – or whatever is in season. Some popular combinations in the past:

Generally speaking if I have an over ripe banana I almost always include it.  It keeps the popsicles nice and soft instead of hard like ice which is good for little mouths to bit into. I also only use whole milk to make the pudding or whole milk yogurt to bump up the calories.

Even on nights when Connor refuses to eat most of his dinner (most nights) I will happily give him a “mopsicle” because they tend to be the healthiest thing he eats all day! Try as we might, evening time is sooooo cranky, sometimes, it is simpler and kinder to give him something that he likes that is healthy instead of having a meltdown in which nobody wins and he ends up not eating anything.
This batch was watermelon, a little strawberry yogurt and some vanilla yogurt and I even threw in a single size serving of applesauce.  Connor is an awesome watermelon masher!  I let him go to town with the avocado masher (a mini potato masher) in an oversized bowl, to keep the splashes in.  He is in charge of putting the tops in and lately he has been working hard at mismatching them. 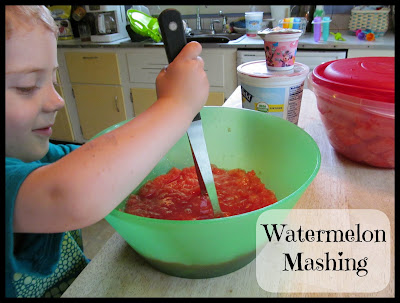 I love the crayola popsicle forms, while they have the hand storage rack, you can store them individually and quickly stick just one under hot water to get it slide off easily.  That is always tricky when you have the 6 pack all together.   So far (knock on wood) they are holding up well – no broken sticks yet! 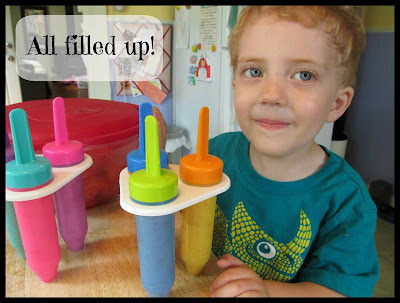 Connor was so excited to go blueberry picking because it meant “blueberry mopsicles”  and there was no putting him off until there was a batch made and in the freezer. 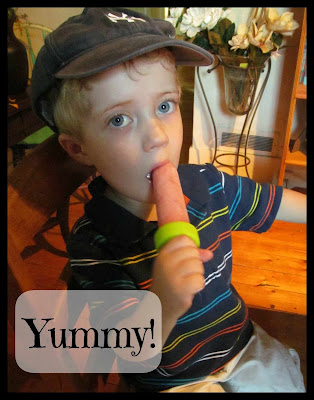 What are your tricks to get healthy foods in your kids?