So I haven’t had a chance to write for a while because Tyler is finally here! Actually, the day after my last post is when he decided to show up!

The next morning Travis left for work early and I was trying to get some extra sleep. No such luck because at about 7:35 am I woke from a sleep because my water broke! I quick called Travis and asked if he wanted to skip work that day. He said “why? did your water break?” and I said “yes it did!” 🙂 He said he was on his way back to the house.

I called my doctors office and they said to head into the hospital. I took a quick shower and finished getting my bags packed to go. I had most of it ready, but got a few last minute things together. Got Zach up and had him get a few things together for going to stay the night with Grandma and Grandpa. Once Travis got back home we took off for the hospital. I was really lucky that my Dr. happened to be at the hospital to do his rounds when I got there. He let me know that he had 2 sets of twins and a hysterectomy to do that day, so my c-section would either begin in the next half hour, or it would be later that day.

WOW! the next half hour?? 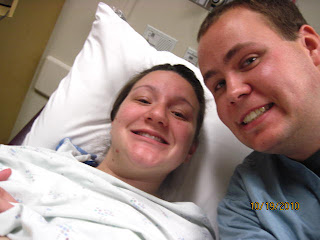 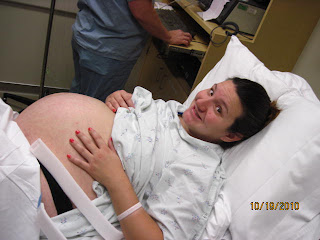 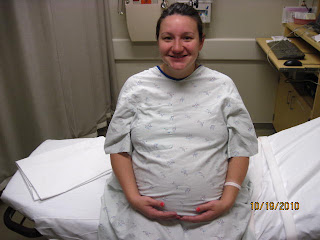 They got me admitted quickly, and told me I would hold my baby in less than an hour! OMG! I was so excited! Shortly after I was in the OR awaiting our new addition!

They brought Trav in and started on their way. It was amazing when Travis looked over the curtain and said “I can see his head!” because they were just at that moment pulling him from my belly! I could hear him cry and I was so excited that Tyler was here! The nurses took him over to check him out. When he cried he sounded a little gurgly because he had fluid in his lungs. They cleaned him up but wanted to monitor him to make sure everything was ok. 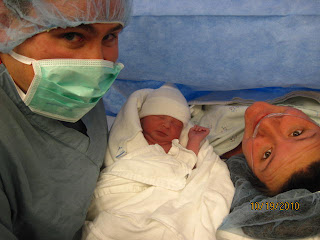 They then took Travis and Tyler to the NICU to watch Tyler because he had fluid in his lungs, and took me to recovery. After an hour I got to go back to my room and see family. They had all been to the NICU and one at a time got to go in to see Tyler with Travis. Is this a proud Big Brother or what?? 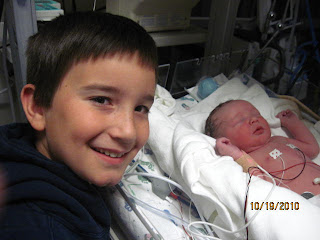 After a close watch for a couple of hours I finally got to cuddle with my baby. They brought Tyler down to see if he would nurse and he did great. Because he did so good they let him stay with us! After just 2 days I was doing so well, and feeling pretty good so they let me go home early! Thank goodness! I was tired of that hospital bed!

Here are some more pictures of Tyler’s first couple days of life!
Mom, Dad and Tyler 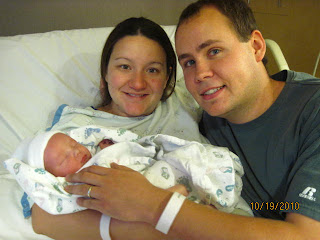 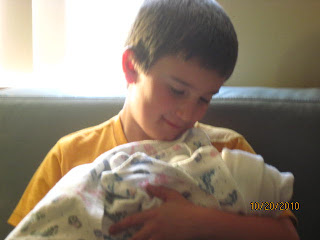 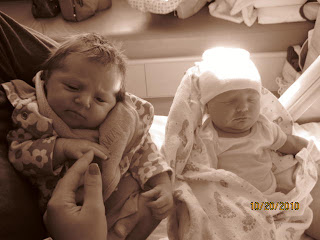 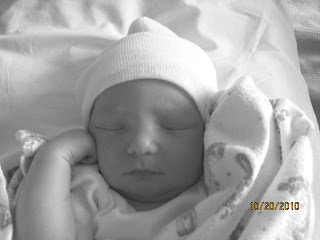 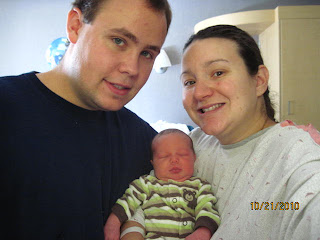 Since we’ve came home Tyler has been amazing. Besides the fact that he likes to sleep during the day and party at night, especially between 2-4 am, He has been a dream. He is pretty quiet and just likes to look around. The obnoxious dog we have seems to not bother him, even when she barks, and she ignores him too! Travis and I are enjoying this time with the boys before he heads back to work, and Zach is loving his little brother. He even told me that just because I am the mom doesn’t mean I can hog the baby! He is liking coming home from school and cuddling with his new brother. He is really making a great big brother, and will be a great role model for Tyler!

I will keep everyone updated as often as possible, and post pictures often too!

I'm so glad we got to have some family pictures ta

Yesterday as soon as they got home from school the

My sweet boy is off to the Navy! Bailey and I went