Since every birth story is different, I wanted to make sure I typed out Zachary’s birth story before we got any further away from it. I mean, it’s only been 10 years already! He deserves his own time too!

So here I am, 18 years old and 33-ish weeks pregnant. {I know, it was my first pregnancy and I kept track of nothing. Not even how many weeks I was. But I’ll explain a little more about the week confusion later!}

So again, here I am about to leave for my Dr. appt. The last week or so before I ballooned up and my face, hands, legs, feet, basically head to toe, I was swollen. It was miserable. I could {only} wear flip flops, and even those cut deeply into my feet. (Plus, just 2 weeks before I had gotten this awesomely awful haircut, that I cried over before I even left the chair….)

Anyway! Off to the Dr. we went. We get there, they check my weight and I was up 15 pounds since the 2 weeks before, my BP was up, I had protein in my urine and the nurses thumb sunk into to my shin. I was a walking case of pre-eclampsia. The Dr. told me I had one hour to get home, pack a few things, and get to the hospital. So that is exactly what we did. Of course, I had nothing packed before this appointment, nor had I considered it, I mean, I was weeks away from having a baby!

We get to the hospital, get checked in and are put in a room. I am hooked up to IV’s, blood pressure monitors and baby monitors. Within a day, I am told I will be staying in the hospital until this baby boy is born.
What the whaaa? Really, I am going to be here for the next 2-ish months???

Yes, I was this naive! I had “What to expect when you’re expecting”. I had flipped through it, reading the weekly updates, but I must have skipped the part about Pre-Eclampsia, or else I figured it didn’t pertain to me. I had no clue what was about to go on!

They would come in each morning and weigh me, watching my weight just go up and up. I was watching the stretch marks across my body, head to toe grow and grow from the rapid weight gain. Protein remained in my urine, and BP stayed elevated and the nurses thumb prints kept sinking further into my shin. Finally after several days, and ultrasounds later, they decided this little boy would be better off as an outside baby rather than in my belly. What should have been a 5 plus pound baby was measuring small at about 3lbs, 12 oz.

It was time to induce.

I was beyond scared. They took us to the NICU to get a tour of where Zachary would be brought after he was born, should their be issues. Seeing those little babies was heart breaking. I broke down in tears, I couldn’t bare the sight of those tiny babies.
I didn’t want to have a baby that was that little.

I was started on Cervidil. After it was placed, I was monitored overnight.
By morning I was dilated to a 1.
Really, a one??? They replaced it with another and we waited. By this time I had already started receiving the shots to develop baby’s lungs and we were on the road to having a baby shortly. When the nurses would check me, it was so painful. As was the replacement of the Cervidil. And to my Dr. dissatisfaction, I was not dilating. Still at a one they decided on trying something else.

They started me on a pitocin drip and moved me into a delivery room. After hours of “labor” and still not dilating, continuing on with my high BP and spiking fevers regularly my Dr decided he wanted to give me an epidural in hopes that it would bring my BP down, and get my body moving in the right direction.

Though when the epidural was placed, baby’s heart rate dropping dramatically. I was told by the Dr. as him and the nurses scrambled around me that they were taking me in for a c-section right now. My husband had enough time to call my parents, and my BFF and tell them quickly what was going on. Then we were taken into the OR where my baby was born.

The first time I saw him was in a Polaroid picture.

After being in “a little” labor for a lot of hours, and being in intense labor for a lot of hours, along with the lack of sleep that I’d had during the last week and a half and the zero sleep I’d had in the past 24 hours, I was exhausted. Later that day the nurses tried to get me to get up and moving, and it just wasn’t happening. I was in so much pain I could barely move my legs, much less get out of bed. But by the next day I was able to get up a little bit more, and the next day I was up and walking and finally got to go see my little “love bug”.

On day 12 I checked out of the hospital, and of course, we had to leave behind Zachary.

My baby bug spent 45 days in the NICU before we got to bring him home.

Holding my baby boy for the first time! 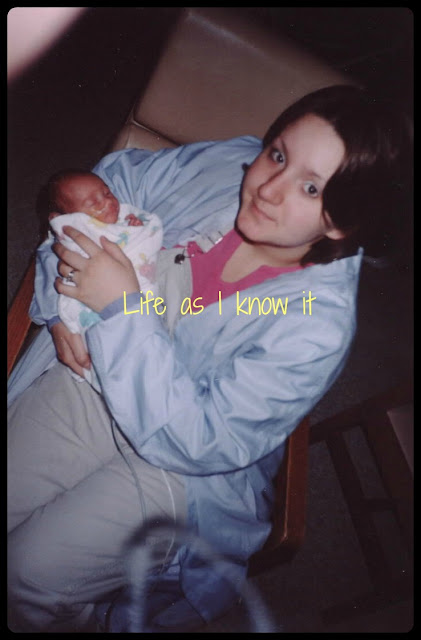 While I was in the hospital for those 12 days, getting weighed each day, I gained a total of 25 pounds… Just while in the hospital. (Gained 65 pounds overall!) And I lost 59 pounds within the first week of Zachary’s life. I just just plain full of water!

Also, I said above that I’d explain the issue with how many weeks I was. Even though I was 33 bordering 34 weeks when I went into the hospital, after I had Zachary, my Dr. decided that I was probably even earlier and charted it as being 32/33 weeks at delivery. Even to this day when I tell people that Zachary was early, I feel like sometimes I say 33 weeks, sometimes I say 34 weeks… I just never know! But typically I’ll say that he was 2 months early.

And I am so grateful to say that besides having RSV right before his 1st birthday, and having very mild Asthma, Zachary is a very healthy kid. I am so grateful for him and the person he has made me!

This girl fills my heart with an insane amount of

The smoke is brutal in the PNW! And now, due to th

Just finished book 24 of my reading goal for the y